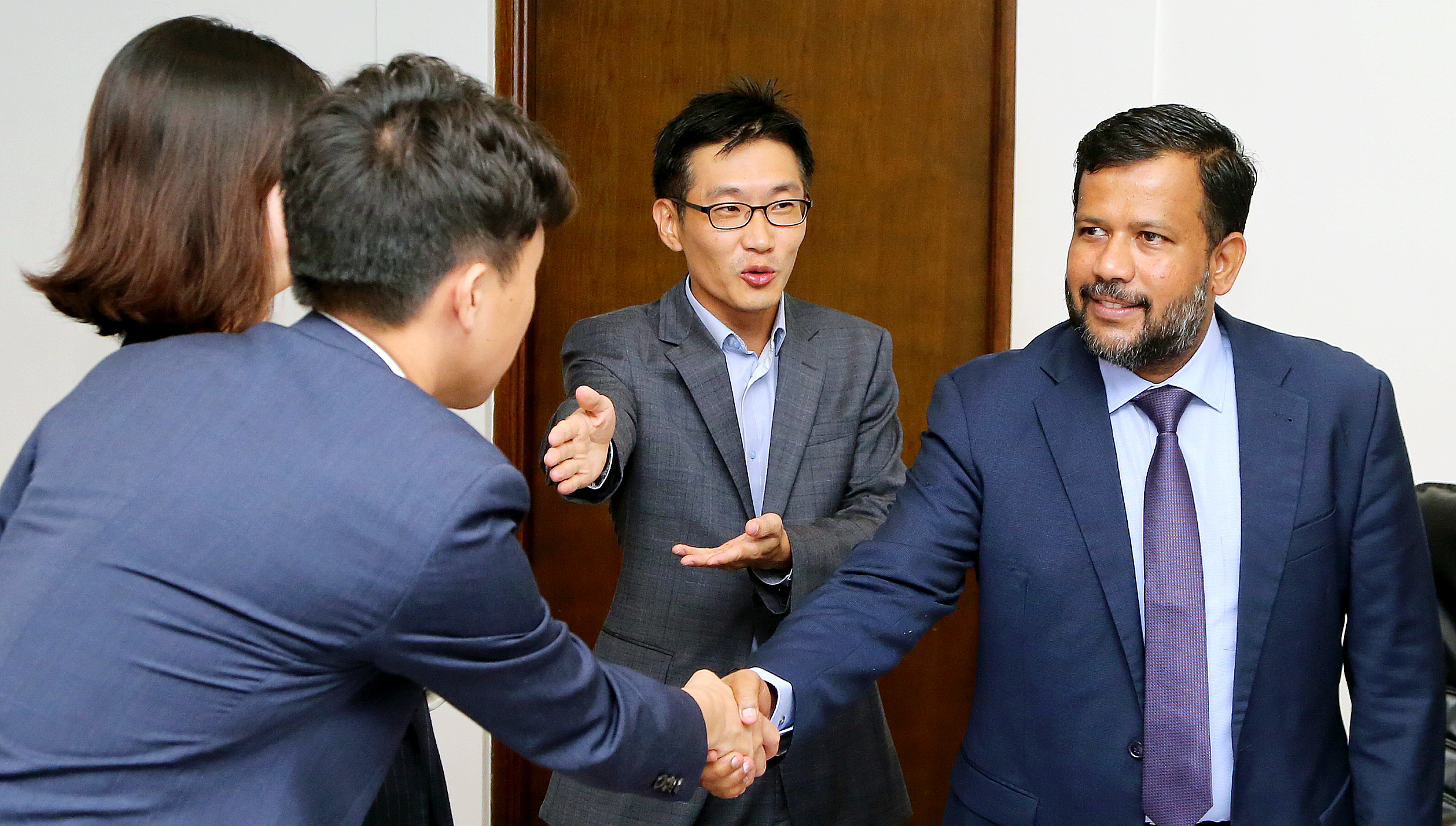 The initial outlay on Sri Lanka’s largest vocational skilling project announced on 28 August has now increased by a huge 60% from its first value. “Due to some important revisions and re-assessments on ground, the project value has been boosted by another US $ 30 Mn to total at US $ 80 Mn. This is a very large project” announced Daekyoo Park, the Country Director of Korea Exim Bank EDCF Colombo Office on 26 September. Country Director Park, who was leading his team to discuss about various cooperation projects by South Korea in Sri Lanka, was addressing the Sri Lankan Minister of Industry, Commerce, Resettlement of Protracted Displaced Persons, Cooperative Development, Skills Development & Vocational Training (ICTPDPCDSDVT) Rishad Bathiudeen during the review meeting held at Colombo’s Industry and Commerce Ministry on 26 September.

Minister Bathiudeen, as the Sri Lankan Minister of Skills Development & Vocational Training, first announced the plan to set up a fully-fledged Ocean University in Sri Lanka with Korean support on 21 August, when he addressed the launch of the modernised Gampaha Technical College (GTC) -also supported by South Korea- under his Ministry. “The Ocean University we have at present is not a complete university. We are planning to set up a fully-fledged Ocean University at a cost of US $ 50 Mn. We will be able to start work on it in the coming weeks” Minister Bathiudeen said on 28 August.

At the 26 September meeting, Korea Eximbank Country Director Park revealed: “The Draft Masterplan that was formulated with stakeholders in September 2018, will be finalised and be ready very soon. The basic structures and course designs of the Ocean University have also been agreed upon. The location of this new University will be at Mattakkuliya.  Another Ocean Training facility is also located at present in Mattakuliya just a few blocks away from this chosen land but the main University will be constructed on the best location for it-that is, at the estuary of Kelani River in Mattakkuliya. Due to some important revisions and re-assessments on ground, the project value has been boosted by another US $ 30 Mn to total at US $ 80 Mn (Sri Lanka Rs 14.5 Billion!). This is a very large project.”

Minister Bathiudeen thanked Korean team for expanding the project and called for support to speed it. “We thank the people of South Korea and Korea Eximbank for the support extended to Sri Lanka’s TVET sector. I readily agree that this is one of the biggest grant projects that Sri Lanka received. I plan to set up two sub centres of this Ocean University-in Puttalam and Mannar. The sub-centres will help more Lankan youth to enrol in this new skilling. I request Exim bank support for this expansion too. As for the main University, the project feasibility study on Sri Lanka’s side has been finalised and we await for the go-ahead from South Korean project unit” said Minister Bathiudeen.

Support by South Korea for Lankan TVET sector has shown a steady increase in recent years.

The Gampaha GTC has been modernised by US $4.5 Mn South Korean loan funding which is the second phase of the two phase US $26 Mn overall project funded by South Korea. The first phase of this Project was the Korea-Sri Lanka National Vocational Training Institute launched by Prime Minister Ranil Wickremesinghe on 21 August in Orugodawatte. At the launch of 28 August GTC, (HE) South Korean Ambassador Heon Lee said: ”This project, supported by Economic Development Cooperation Fund (EDCF) of South Korea, is an effort to share Korea’s development experience with Sri Lanka…We shall provide high quality vocational training, leading to poverty reduction, the primary aim of Sustainable Development Goals.”