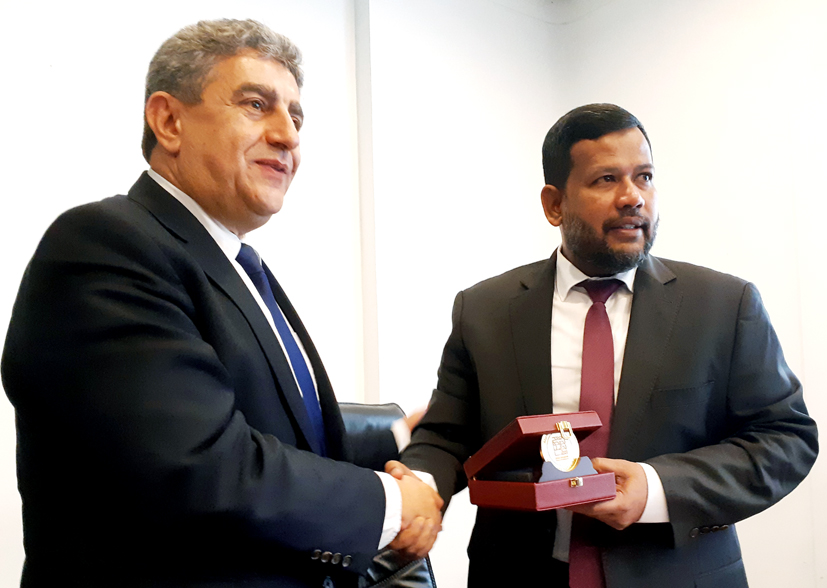 Security has become the key issue in Sri Lank in the aftermath of Easter Sunday bombings, but if other pressing problems are ignored in lieu of ‘security’, they would themselves escalate into security threats, warned a visiting conflict expert from Doha Qatar -who is also a Fellow of the Brookings Institution- on 26 October in Colombo.

“Easter Sunday bombings really delayed progress in many aspects of Sri Lanka. If other pressing issues of communities are not addressed they can escalate into security threats in future” warned the Director of Center for Conflict and Humanitarian Studies of Doha Institute of Graduate Studies, Qatar Mr Sultan Barakat on 26 October.  Leading an 11-country student delegation from his Center, Director Barakat (who is also a Senior Fellow of the Brookings Institution) was meeting Sri Lanka’s Minister of Industry, Commerce, Resettlement of Protracted Displaced Persons, Cooperative Development, Skills Development & Vocational Training (ICTPDPCDSDVT) Rishad Bathiudeen on 26 October at the Ministry, Colombo 3.  The visiting student delegation was meeting Minister Bathiudeen at the end of their ten day Sri Lanka field tour during which they spoke to local conflict and resettlement experts, and visited the Northern areas and met individuals who lived through the conflict. Director Barakat was also a prominent personality in Doha’s two-day peace talks (concluded early July 2019) to end the Afghanistan war. The Doha talks were sponsored by Qatar and Germany.

“By definition this student delegation is from Muslim countries. But in this academic exercise, we are not only interested in problems of Muslims in Sri Lanka but also interested in a wide range of issues faced by all communities here-the displacement of Tamil communities, return of them, the economic reconstruction opportunities, the FDI investments coming to Sri Lanka etc-we are interested in the whole, comprehensive picture in this academic exercise. We come here to learn from the Sri Lankan experience of dealing with a conflict and Internally Displaced Students (IDPs). We see that Sri Lanka has lots of experience in reconstruction and reconciliation since 2009. We can learn from this experience and also give our inputs to Sri Lanka. We’d like to think that just visiting those IDP communities here will give the IDPs the energy for resettlement and reconciliation” said Director Barakat and warned: “We feel that Easter Sunday Bombings really delayed progress in many aspects of Sri Lanka including in displaceds’ return to lands and resettlement since everybody is now concerned about security first. “Security first’ may not be the best approach because there are other, more pressing needs of local communities and if they are not addressed they can escalate into security threats in future.” Minster Bathiudeen welcomed Director Barakat’s comments and listened to the Sri Lankan experiences of the visiting students. “Thanks to speedy action by the Sri Lankan government, people and the security forces, the suspects of Easter Sunday bombings were apprehended immediately. In fact, the role of our Muslim community in assisting the security forces to identify remaining extremists was commendable, and helped in ending the local tensions that could have been devastating to us if it was not controlled in that way. I too realise that ignoring pressing issues of communities can lead to later conflicts. Therefore as the Sri Lankan Minister for Resettlement of Protracted IDPs, I have instituted a Resettlement Task Force under my Ministry to look into protracted IDP issues in the country and we have made progress since we commenced work through this Task Force.”