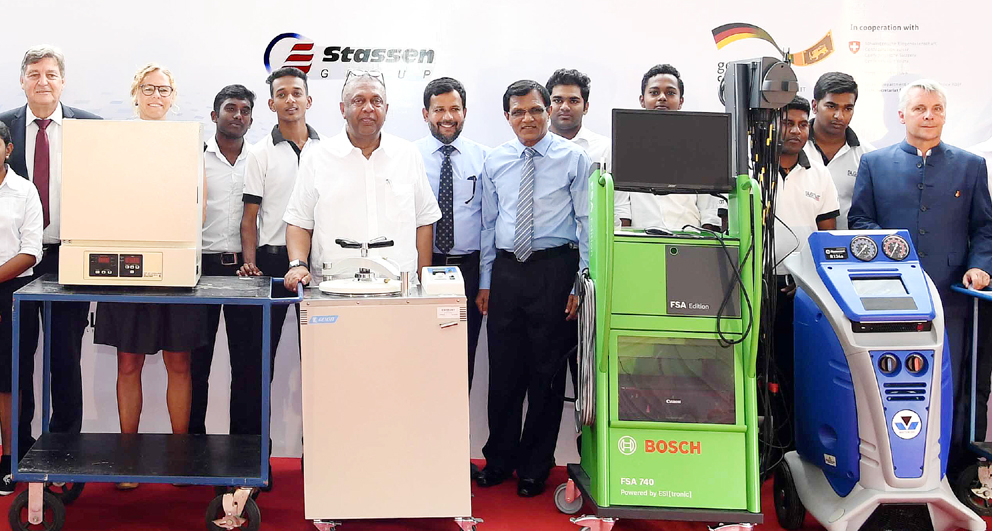 The first hi-tech vocational training centre in Sri Lanka’s Northern Province was launched on 18 September. The US $ 7.6 Mn new facility in Ariya Nagar, Kilinochchi gives Northern youth the sought-after, hi-tech NVQ level course offerings such as IT, electronics and automotive mechanics for the first time. “We thank the German people and GIZ Sri Lanka office for this support. Also the state of art equipment valued at Rs 350 Million donated by the Stassen Group which is led by Chairman Harry Jayawardana shall contribute immensely to enhance the industry–oriented skills of the youth here. This project shows the close relationship and partnership between the industry and TVET sector” said the Minister of Industry, Commerce, Resettlement of Protracted Displaced Persons, Cooperative Development, Skills Development & Vocational Training (ICTPDPCDSDVT) Rishad Bathiudeen in Ariya Nagar, Kilinochchi on 18 September. Minister Bathiudeen was joined at the Kilinochchi National Level Vocational Training Centre (KNLVTC) launch by Minister of Finance and Mass Media Mangala Samaraweera, GIZ Sri Lanka Country Director Christiane Einfeldt, HE German Ambassador to Sri Lanka Joern Rohde and officials of National Apprentice and Industrial Training Authority (NAITA) under Minister Bathiudeen.

KNLVTC, while being the first non-University level, hi-tech TVET training centre in North, is also  the second National Vocational Training Centre in Sri Lanka set up with the support of the German Government. It fills the void of a National Vocational Training Institute in the Northern and Eastern Provinces for the first time. KNLVTC is done in collaboration with NAITA operating under Minister Bathiudeen. The investment for KNLVTC was  US $ 7.67 Mn (SL Rs 1.3 Bn). The German KWF Bank provided the financial support. The Sri Lanka German Training Institute (SLGTI) was declared opened by HE President Maithripala Sirisena on 17 June 2016. SLGTI is NAITA’s only institute conducting NVQ level 5 and 6 courses.

“Though this centre is located in Killinochchi at present, the students studying here are not only from the Northern and Eastern but also from other districts in the country. This institute is multi-disciplinary and multi ethnic in its composition. We thank the German people and GIZ Sri Lanka office for this support. This initiative shows the close relationship and partnership between the industry and TVET sector” Minister Bathiudeen added.

The campus spreads over 15 acres, and consists of modern laboratories, libraries, computer centers, lecture halls and student hostels and the construction of a new hostel complex for 400 students will begin  soon with the assistance of the Skills Sector Development Project (SSDP) at a cost of Rs 400 million.

The donation of the equipment to KNLVTC, is a result of the partnership agreement between the Stassen Group and GIZ on behalf of the Federal Ministry of Economic Cooperation and Development (BMZ).