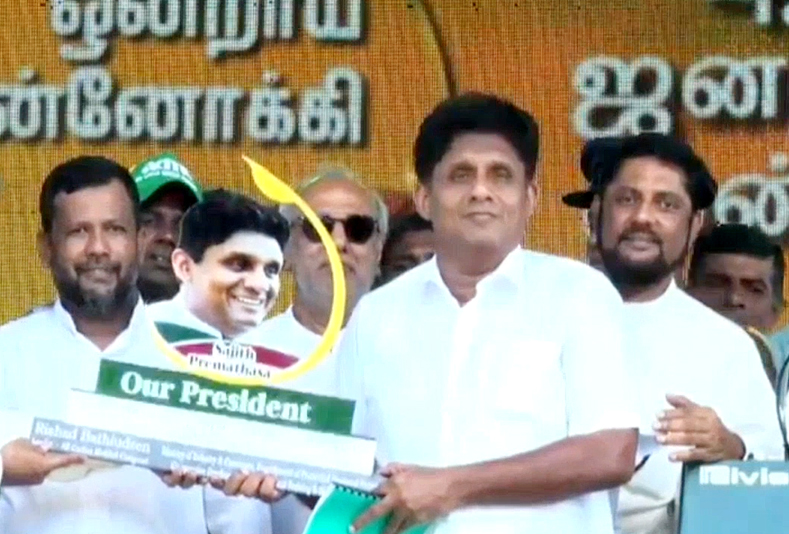 The All Ceylon MakkalCongress (ACMC) blew an election fraud whistle on 8 November saying that fraudulent vote buying with cash is being planned. ACMC also cautioned voters to not to ‘sell their votes for a few extra rupees.’

“We have been informed that in the coming days organised vote buying will take place in Mannar area to defeat Sajith Premadasa and us. Do not be deceived by a few extra rupees” said the Leader of ACMC, Vanni District MP Rishad Bathiudeen. ACMC Leader and Minister of Industry, Commerce, Resettlement of Protracted Displaced Persons, Cooperative Development, Skills Development & Vocational Training Bathiudeen, joined by NDF Presidential Candidate Sajit Premadasa and Leader of SLMC Rauff Hakeem, was addressing the 117th  NDF rally in support of NDF candidate Sajith premadaasa held at Mannar Sports Grounds on 8 November. A large crowd gathered to witness the 8 November NDF rally in Mannar. The ACMC has pledged its support to Presidential candidate Sajith Premadasa of the UNP led New Democratic Front (NDF) alliance in the forthcoming Presidential election.

“The forthcoming Presidential Election is not a regular Presidential Election but one that will be very decisive for Sri Lanka’s future. The ‘freedom’ or ‘slavery’ of Sri Lankan minority communities will be decided based on the outcome of this election” said ACMC Leader Bathiudeen and added: “Therefore your vote needs to be cast very carefully. It is very important that we should be united. The Tamil speaking parties and minority parties are united is their support for NDF candidate Sajith Premadas in order to safeguard them against an oppressive tyranny that will enslave them. Our effort is to stand together to preserve our human dignity and stand against oppression of minorities of our own country. The forces that attacked minorities, minority leadership, minority businesses and trade and wanted anarchy here since the end of war have now banded together with the opposition Presidential candidate to enslave us. They are getting together with a view of enslaving the minorities. These racist elements should be defeated. Therefore your duty in this is to vote for Sajith Premadasa on 16 November. Offer your prayers first on 16 November morning then be at the polling booth by 7am to cast your vote for Sajith Premadasa. Do not neglect or ignore your voting power. This challenge is not about two opposition Presidential candidates but about anarchy in our country and enslaving of minorities versus Sri Lanka’s democracy and justice. We should emerge from this challenge safeguarding our livelihoods, economy, our rights-this is our own country and we should not let anyone enslave us in our own country. The way to defeat such racist forces is to stand united as minorities. We should show that the minority voice needs to be respected when choosing the President of our country. We have been informed that in the coming days organised vote buying will take place in Mannar area to defeat Sajith Premadasa and us. Some wealthy persons in this area are preparing to hand out cash to buy your votes in favour of opposition candidate. Do not be deceived by a few extra rupees and do not sell your votes but cast your vote to bring the largest number of votes from Mannar for Sajit Premadasa’s win.”

Vote buying is illegal and a fraudulent practice in Sri Lanka. Section 66.(d) of Presidential Elections Act No. 15 of 1981 stipulates that any person “who sells or offers to sell any ballot paper to any person or purchases or offers” shall be guilty of “an offence and on conviction by the High Court, be liable to imprisonment of either description for a term not exceeding two years and shall, by conviction, become incapable, for a period of seven years from the date of his conviction, of being registered as an elector or of voting at an election…”